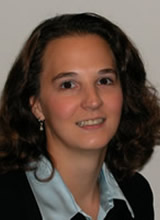 The Emerging Leader award is presented to an alumnus or alumna who graduated within the last 10 years for his or her dedicated service and leadership to Moravian College. The Alumni Association gratefully acknowledges Michelle Litzenberger Trent ’93 for her service to Moravian.

As a 1993 graduate in International Management, Michelle studied abroad in Toulon, France during her junior year of college. She was a member of the French Club, was a French language tutor, and served as promotions coordinator for the Activities Program Board, and secretary and menus coordinator of the International Club. From 1999 through May of 2001, Michelle chaired the Young Alumni Board’s Career Development Committee, where she used her outstanding organizational skills to help develop mock interviews for juniors and seniors and to organize career panels. She also served on the executive board. A member of the Alumni Career Advising Program, Michelle has participated in the student-alumni career networking reception and as a career panelist. Since 1995 she has served as her class correspondent, has attended numerous alumni events, and has enjoyed serving candles at Vespers. Michelle began her professional career at Browning-Ferris Industries (BFI) where she became a National Account Manager for North America and won the prestigious President’s Club award for achieving the top 1% in the company’s national sales force of 3000 individuals. From 1999 until 2002, Michelle was an independent consultant while she also completed her MBA from Lehigh University. Since receiving her MBA she has been director of sales of ACBS Group, Inc., where she has already received their distinguished SME Award for recruitment, training, and management of the ACBS sales force. Michelle and her husband David currently live in Whitehouse, NJ, and plan to move to Lower Saucon Township in 2004.