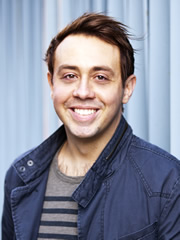 The Young Alumni Achievement Award is presented to an alumna or alumnus who has achieved exceptional success in his or her profession and who has graduated within the past two to ten years. In recognition of his international career as a educator, journalist and poet, the Alumni Association is honored to recognize William Trub ’03 with the 2012 Young Alumni Award.

William Trub, a Comenius Scholar, graduated from Moravian College in 2003 with Honors in English. He then moved to the United Kingdom to obtain his M.A. in the Teaching and Practice of Creative Writing from the University of Wales. In 2007 he received his certificate in teaching English as a foreign language through the University of Cambridge in England.

While at Moravian College, Bill served as co-editor of The Manuscript, the college's literary magazine, and won Lebensfeld Prizes for Best Short Story and Best Poem. Bill continues his career as a writer; to date, he has had 29 poems and microfictions featured in various anthologies and journals. His debut book, a collection of poems and microfictions entitled A Man's Abortions, will be published in 2014.

Currently, Bill lives in New York City and teaches at an after-school program for low-income teenagers in Brooklyn. In 2010 and 2011, Bill served as a Peace Corps Volunteer in rural South Africa, where he taught literacy, geography, and numeracy in impoverished primary and middle schools. He lived with a tribal chief and was the personal tutor to the future king of Ga-Chuene village! Prior, Bill taught at Ocean County College in New Jersey and also was the senior editor of Business Facilities, an international trade magazine.

An adventurous traveler, Bill has visited more than 30 countries but still returns periodically to Moravian. For several years he served as an alumni judge of the Lebensfeld Prize. And in 2008 he came to Moravian to deliver a speech to students on how to succeed with so-called “impractical” degrees—a feat which he has most certainly accomplished.