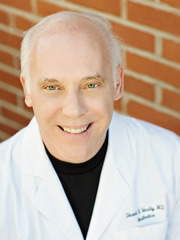 The Comenius Alumni Award recognizes an alumna or alumnus for outstanding achievement in her or his field of work. The Moravian College Alumni Association is pleased to present David B.Vasily ’71 with the 2012 Comenius Alumni Award in recognition of his exceptional career as a physician, research scientist, and businessman.

David B. Vasily graduated with Honors from Moravian College in 1971 with a B.S. in biology. He went on to attend medical school at the State University of New York at Buffalo, intern for a year in Internal Medicine at Lehigh Valley Hospital, and finally complete a Dermatology Residency at Geisinger Medical Center. After finishing his medical schooling, David returned to Bethlehem and established Lehigh Valley Dermatology Associates. He then set up and directed the first inpatient dermatology unit in the Lehigh Valley at Muhlenberg Hospital Center. In 1995, he established a second practice, Aesthetica Cosmetic and Laser Center.

David’s excellence in medical research began at Moravian College with his Honors project, which involved the identification of unusual protozoan animals from a cow’s stomach. The article David wrote detailing this research was published in the Transactions of the American Microscopical Society publication, a peer-reviewed journal. Since then, his extensive research on various subjects has been published in many journals. In addition, David has had the honor of serving as a peer reviewer for several journals.

David works on the cutting edge of the field of cosmetic and laser surgery, providing expert consulting to many laser companies and developing new products and technology. He holds four patents and has one pending. One patent is regarding a device that reads human skin color, and the others on new and unique skin rejuvenation molecules. David also has a special interest in treatment of skin diseases in athletes. He is the team dermatologist for Lehigh University’s wrestling team, and has co-authored the National Athletic Trainers Association guidelines in skin infections in athletes, which is the current standard used by athletic trainers.

David has remained committed to Moravian College and the Bethlehem area. He served on the Alumni Board of Moravian College and on the Commission on the Future of Moravian College, and he was also involved in the Alumni Ambassador Medical Program at Moravian. His work at Lehigh University also led him to receive the Friend of Lehigh award, a rare honor for someone who did not graduate from Lehigh. Above all, he continues to make a positive impact on the medical care of the Lehigh Valley through his research and clinical work.