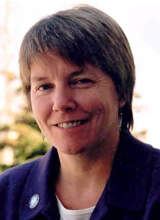 A distinguished alumna of both Moravian College and Moravian Theological Seminary, Bethlehem native Reverend Dr. Carol Vogler received her BA in 1980 from the College and her Master of Divinity from the Seminary in 1986. She also earned her Masters of Theological Studies from Boston University School of Theology in 1983 and her doctorate in human ecology from the University of Alberta in 2001. Her doctoral thesis, The Experience of Hope among Women with HIV/AIDS, reflects her ongoing commitment to the battle against this horrific epidemic. Her initiatives to fight HIV/AIDS began through support agencies in both Maine and Pennsylvania. Through these agencies, Dr. Vogler developed and conducted awareness and education programs while she also coordinated support and outreach programs. During this time her focus was on the care of women, children and families affected by HIV/AIDS. Currently a resident of Edmonton in Alberta, Canada, Dr. Vogler has shifted the focus of her HIV/AIDS involvement toward inner city residents and Canada’s native peoples. She has also begun laying groundwork for a partnership with an HIV/AIDS orphanage in South Africa. In addition to her remarkable involvement in the battle against HIV/AIDS, Reverend Vogler has ministered to an extended spiritual flock, serving as pastor to six Moravian Churches in the United States and Canada from 1988 to 2001. Most recently, she has held a significant leadership role in the Moravian Church, serving as vice president of its Canadian District and as a board member of On Eagles Wings, an ecumenical outreach to Canada’s northern aboriginal peoples. Dr. Vogler also serves on Moravian Theological Seminary’s Board of Trustees. If true achievement can only be measured by the good we do for others, Dr. Vogler can claim complete success in her work, her life, and her scholarship. Her humanitarian and pastoral example inspires us all, and Moravian is especially proud to count her among its alumni.