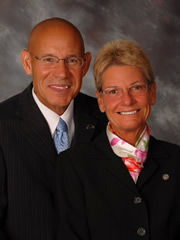 Although John and Mary Ann Williams became college sweethearts at Clarion University in the early 1970s, to friends, family and the Moravian College community the couple is Blue and Grey through and through.

Their nearly 30-year commitment to Moravian began in the 1980’s, when Mary Ann accepted the first of a number of positions at Moravian and John became involved in numerous Moravian activities. In 1999 Mary Ann started work at Lehigh Valley Association of Independent Colleges, whose office is on Moravian’s campus. A year later, John began his 11 year tenure in Moravian’s Institutional Advancement office. Mary Ann and John were seemingly inseparable around campus, becoming fixtures at numerous events, programs, and athletic contests.

Each year they served as guest athletic coaches and volunteered at Moravian vesper services, Homecoming, Alumni Weekend, and Founders Day Love Feasts; and for 10 years Mary Ann was the chapter advisor for Alpha Sigma Alpha national sorority. In 2013 they were jointly honored with the H.T.D. Gillespie Award in recognition of their “outstanding support of Moravian Greyhound athletics,” and in 2012 Omicron Gamma Omega fraternity made John an honorary member. They now reside in Carolina Shores, N.C.

When asked if they were Moravian graduates, John’s customary response was, “We didn’t graduate from Moravian, but we wish we had.”  Now they can proudly declare they are alumni.