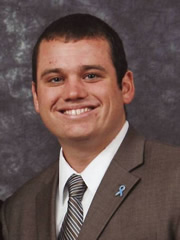 The Young Alumni Achievement Award is presented to an alumna or alumnus who has achieved exceptional success in his or her profession and who has graduated within the past two to ten years. In recognition of his work in promoting and educating men on health issues, the Alumni Association is honored to recognize Scott Williams ’04 with the 2012 Young Alumni Award.

Scott T. Williams received his B.A. in political science, graduating with Honors from Moravian College in 2004. While at Moravian, he spent one semester participating in the Washington Semester Program, studying American Politics at American University in Washington, D.C. He later returned to American University to complete his Master’s degree in Public Administration.

After graduating from Moravian, Scott worked as the Public Relations Manager for Sanofi Pasteur in Swiftwater, PA, and as a Senior Analyst of Strategic Services at PharmaStrat, Inc. based in Flemington, NJ. He is now the Vice President of Men’s Health Network, a national non-profit organization which reaches men and their families with health prevention messages and tools where they live, work, play, and pray. Scott is a popular speaker on men’s health issues, and has presented for the U.S. Food and Drug Administration, the United States Senate, and the World Congress on Men’s Health, among others. He also writes for and is a peer reviewer for the American Journal of Men’s Health.

Scott is involved in many community organizations which promote health and awareness. He founded the Men’s Health Caucus within the American Public Health Association and he serves on the Board of Directors for RetireSafe, Veteran’s Health Council Foundation, and Women Against Prostate Cancer.

While attending Moravian, Scott was involved in numerous on-campus activities. He served as a Senator, and then Vice President, of United Student Government, and was the Vice President of Communications in Sigma Phi Epsilon. He competed on Moravian’s Varsity Track and Field Team, and was a member of Omicron Delta Kappa and the Student Alumni Association. Today his involvement at Moravian continues as he serves as a Board Member of the Moravian College Alumni Association and the Chapter Development Task Force Chair.