Back to Moravian College
Back
Office for Diversity, Equity and Inclusion

Office for Diversity, Equity and Inclusion

The Office for Diversity, Equity and Inclusion

Moravian College is committed to diversity, equity, inclusion, and a process that draws on our community’s collective expertise, including but not limited to faculty, staff, students, administrators, alumni, and board of trustees. The development and implementation of this process intended to advance diversity, equity, and inclusion on our campus and beyond in more deliberate, measurable, and meaningful ways.

Moravian College aspires to be a welcoming community that embraces and values the diversity of all members of the campus community. We strive to accept the uniqueness of all individuals, and we cultivate an environment that respects, affirms, and defends the dignity of each member of our community.

This year on Juneteenth, the Office of Diversity, Equity and Inclusion (DEI) would like to acknowledge, honor and offer gratitude for the tremendous contributions Black Americans have made towards advancing the on-going and imperiled task of achieving democracy and justice in the United States. Black Americans have been enslaved, subjugated, vilified, and criminalized. They have also given voice to the nation’s noblest ambitions.

This spring and summer, many at Moravian College, as throughout the nation, are responding to the persistence and travesty of police brutality. Many Americans are recognizing the systemic, in addition to the interpersonal, nature of racism and responding with protest and outrage. Many are examining their own power and privilege. People are marching in the streets, demanding changes from elected officials and leaders of institutions, having difficult conversations with friends and relatives, learning to listen to new perspectives, and more. Such actions are well overdue, brave and beautiful.

To those engaged in this struggle, DEI offers you the gift of a reminder of the history you are continuing and the Black American leaders and intellectuals who forged the path for you. Here are just a few examples:

Today people say ‘systemic racism.’ Abolitionist Frederick Douglass (c. 1817-1895) spoke of “where justice is denied, where poverty is enforced, where ignorance prevails, and where any one class is made to feel that society is an organized conspiracy to oppress, rob and degrade them…” He noted as well, “Power concedes nothing without a demand. It never did and it never will.”

Today people say ‘intersectionality.’ In a speech in 1851 at the Ohio Women’s Rights Convention, abolitionist and women’s rights activist Sojourner Truth (c. 1797-1883) reportedly pointed out the degrading treatment she received by white men, despite the fact that she was a woman. Similarly, anti-lynching activist and journalist Ida B. Wells (1862-1931) noted, “Virtue knows no color line, and the chivalry which depends upon the complexion of skin and texture of hair can command no honest respect.”

Today people protest police brutality and the extrajudicial murders of Black men and women. “Say their names,” protestors cry. In the 1890s, Ida B. Wells launched an anti-lynching campaign that ultimately attracted international attention. She investigated all reported cases of lynching, and said their names over and over, including in publications such as Southern Horrors and The Red Record. “In fact, for all kinds of offenses—and, for no offense—from murders to misdemeanors, men and women are put to death without judge or jury…,” Wells informed the world.

Today people struggle for racial and economic justice. Renowned labor leader A. Phillip Randolph (1889-1979) argued, “A community is only democratic when the humblest and weakest person can enjoy the highest civic, economic and social rights that the biggest and most powerful possesses.”

Today people applaud the bravery of bystanders, including children, who record police brutality on their phones and expose the truth. In 1955, Mamie Till (1921-2003) decided to leave open the casket of her 14-year old son who had been brutally murdered following a supposed interaction with a white woman, who later recanted her account. “I wanted the world to see what they did to my baby,” Till declared.

Today’s protesters continue a proud history. “Never forget where we came from and always praise the bridges that carried us over,” urged civil and voting rights activist Fannie Lou Hamer (1917-1977).*

During the spring 2020 semester, Moravian College’s Black Student Union (BSU) sponsored a Black Lives Matter protest on campus. That important, historic and well-attended event attracted the participation of many students as well as staff, faculty and administrators. The speakers at the event called attention to the tragic reality in the United States of the denial of Black humanity and the criminalization of Black and Brown bodies.

Just this month, the United States has witnessed multiple examples of the denial of Black humanity and of criminalization.This week, a Black man who was bird-watching in Central Park in New York asked a white woman to put her dog on a leash (while standing next to a “your dog must be on a leash” sign) so the dog would not damage the brush his cherished birds use as a habitat. The white woman responded by first threatening and then actually calling the police to report she was being threatened by “an African American man.”  She emphasized the bird-watcher’s race, it seems, to justify her fear of him and also to incite a sense of urgency on the part of the police that she was in danger. By so doing, she was both being racist and weaponizing the tragic reality of the prevalence of police brutality.

Also this week, in Minneapolis, George Floyd, an unarmed Black man, died while he was being detained by white police officers for a non-violent charge. Bystanders videoed the incident, during which one of the officers knelt on Floyd’s neck, and Floyd uttered the haunting and tragically familiar phrase, “I can’t breathe.”

And earlier this year, an African American jogger, Ahmaud Arbery, was killed by an armed white civilian in Georgia. The white man and his father assumed Arbery was a burglar.  In addition, in March, police officers killed African American EMT Breonna Taylor while executing a search warrant for a man who did not live in her home.

These are only some of the recent examples of injustice. And they have occurred as the coronavirus is taking some of its gravest tolls in communities of color. Centuries of systemic racism and discrimination have left communities of color more vulnerable to the virus than others. Residential segregation, employment discrimination, and unequal access to quality health-care are just some of the causes of the heartbreaking discrepancies.

Meanwhile, hate-crimes targeting Asians and Asian Americans have been on the rise.  Inaccurate beliefs about Asians and the source of the coronavirus fuel these acts of bigotry.

As you are grappling with these events, Moravian College wants to make sure that you have the support you need. We, along with President Grigsby, encourage you to reach out to friends, family and others in your support networks as you process your feelings and responses.  Please also know that you can reach out to the Bias Response and Intervention Team (BRIT); Office of Diversity, Equity and Inclusion; the Office of Spirituality and Inclusion; and others in your college support networks.

Finally, we want to reiterate that Moravian College is a welcoming community that embraces and values the diversity of all members of the campus community. Moravian College condemns bigotry and hatred and stands firmly in support of diversity, equity and inclusion. The College is committed to accepting the uniqueness of all individuals, and we cultivate an environment that respects, affirms, and defends the dignity of each member of our community.

The Office for Diversity, Equity and Inclusion (DEI) serves as the primary campus resource charged with the creation of an inclusive and intercultural community at Moravian College. We provide cultural programming and support services for students from traditionally minoritized identities, empowerment for allies, and partnerships with student organizations whose missions are similar to the Office.

We enhance partnerships with faculty, staff, and community partners so that we may serve as liaisons and advocates to meet the needs of our diverse student population.

The Office for Diversity, Equity and Inclusion supports the overall mission of the College to welcome all individuals from all walks of life, locally, nationally, and globally. 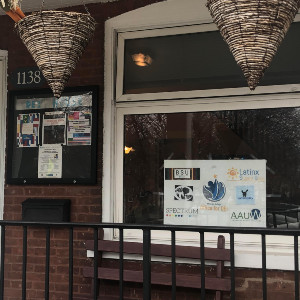 The Diversity House (1138 Main Street) is the space where the Office for Diversity, Equity and Inclusion resides, which provides student-centered approaches to meet the needs of the diverse Moravian community.
visit us

If you would like to be added to our DEI Happenings Listserv, email us at dei@moravian.edu