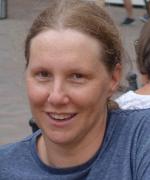 Teaching: I teach courses on medieval history, English history, the history of popular culture, and women's history.  I also teach Introduction to Women's Studies, plus seminars on peasant history and the history of disease.

Current Research: I am co-author with Judith M. Bennett of the 12th edition of Medieval Europe: A Short History (July 2020, Oxford University Press)."I am currently interested in the ways in which archaeological remains provide us with data about women's and men's health in late medieval England.  I have published on sex ratios, attitudes towards women's speech, women's wages, and women's status in the middle ages.