Office of the President

Office of the President

Quick Facts about our President 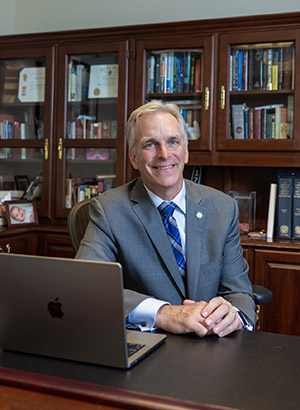 Since becoming President in 2013, Bryon Grigsby has been leading Moravian University and Moravian Theological Seminary in our pursuit of academic access and innovation. Here are five facts you should know:

Bryon L. Grigsby ’90 returned to his alma mater and began his tenure as 16th president of Moravian University and Moravian Theological Seminary on July 1, 2013. During his first year, Grigsby led Moravian through a number of important initiatives that have improved and developed the academic programs, upgraded facilities, and greatly enhanced the technology infrastructure on campus. He also led the college in developing a five-year strategic plan. On July 1, 2021 Moravian University officially transitioned to Moravian University under President Grigsby's leadership.

One of Grigsby’s first initiatives was to integrate technology into the classroom to enhance the learning experience for students and faculty. He developed a program to issue a MacBook Pro® laptop and an iPad® to all undergraduate students entering in the fall of 2014. The program facilitates the "classroom flip" model of learning in which students access online lectures and resources outside of class, allowing professors to spend more time working directly with students in the classroom. The college has also implemented a state-of the-art wireless mesh network that encourages a collaborative knowledge-sharing environment designed for interactive learning anywhere on campus. In 2021, Moravian was named an Apple Distinguished School for the 2nd time.

“Building Community” was the theme of Grigsby's inauguration, and he has been hard at work bringing this to life on campus. The college has enhanced its new-student orientation program, focusing on community, traditions, and campus engagement. It opened a new Center for Intercultural Advancement and Inclusion (now the Office for Diversity, Equity and Inclusion); initiated Winterfest, a festival featuring games, food, and a variety of activities for the campus community; and launched Hounds around the Grounds, which placed tables and chairs, outdoor games, and hammocks around campus.

In fall of 2016, the college held its first Heritage Day, during which students, faculty, and staff came together to celebrate the institution's long and storied history and then go out into the community, giving 2,390 hours of service to 27 nonprofit organizations in the Lehigh Valley.

Grigsby has become increasingly involved in the community surrounding Moravian University. He is a board member of the Lehigh Valley Economic Development Corporation and a member of the Bethlehem Rotary Club. Perhaps a culmination of this focus on community was Moravian being named a Top Work Place in the Lehigh Valley seven out of eight years (2014-16, 2018, 2019, 2020, 2021) by The Morning Call. In addition, President Grigsby received the Leadership Award for large employers.

Under Grigsby’s leadership, the university has strengthened its internship program with the development of internship seminars and more rigorous assessment. It added a number of new programs, including five-year undergraduate/graduate degrees in business, and a health sciences track that leads to graduate studies in athletic training, occupational therapy, and physical therapy. Moravian University's Graduate program successfully developed an accelerated post-baccalaureate nursing program, obtained Pennsylvania Department of Education approval for an M.Ed. in Special Education, launched a doctor of athletic training program, a master of science in athletic training, a master of science in speech-language pathology program, and the online master of science in predictive analytics program which launched in September 2019.

A strong advocate for private liberal arts education, Grigsby is a member of the Chronicle of Higher Education Book Club, which examines important issues in higher education, and he is an active member of the Council of Independent Colleges (CIC). In June of 2014 he presented “College, Reinvented” at the national media annual conference in Washington, D.C., sponsored by CIC and American Association of State Colleges and Universities (ASSCU).

Fundraising and resulting capital improvements on campus have also been significant since Grigsby arrived on campus. In spring of 2016, Moravian University unveiled its new Sports Medicine and Rehabilitation Sciences Center featuring cutting-edge classrooms and equipment and housing a St. Luke's Health Network Sports Clinic, which allows for collaboration between sports medicine clinicians and faculty in the education of the college's graduate students. The state-of-the-art John Makuvek turf field for soccer and lacrosse saw competition beginning in September 2016, and the Sally Breidegam Miksiewicz Center for Health Sciences, housing cutting-edge labs and classrooms for the college's nursing, public health, informatics and undergraduate health sciences programs, opened in fall of 2017.

On the fundraising front, the endowment surpassed the $100 million mark for the first time in the Moravian's long history. In October of 2022, the campaign for Moravian University, Lighting the Way, was officially launched.

In the Admissions arena, the college continues to attract highly accomplished students from around the country, as well as around the globe, and the graduate program continually exceeds their enrollment goals, as does the Seminary.

In July 2021, President Grigsby, Moravian University, Moravian Theological Seminary and the Lancaster Theological Seminary formally began exploring the combination of these historic institutions. In the fall of 2022, Moravian University officially opened an office on the campus of Lancaster Theological Seminary to serve students with online degree completion and graduate business and certificate programs. In addition, a full-time staff member within the Office of University Partnerships was added to connect with businesses and organizations in Lancaster interested in partnering with Moravian to offer benefits like tuition discounts, workforce upskilling and employee acquisition and retention programs.

Before returning to Moravian, Grigsby served from 2008 to 2013 as senior vice president and vice president for academic affairs at Shenandoah University in Winchester, Virginia. From 2000 to 2008, at Centenary College in Hackettstown, New Jersey, he was an assistant professor of English and director of the Writing Center, dean of graduate and professional programs, vice president for strategic implementation and professional programs, and provost and chief operating officer.

In the classroom, Grigsby has regularly taught courses in his fields of expertise, including composition, Chaucer, Shakespeare, medieval and early modern literature, and the history of medicine and disease. As a scholar, Grigsby has written a monograph, Pestilence in Medieval and Renaissance English Literature, and Misconceptions of the Middle Ages, a collection of essays compiled with his co-editor Stephen Harris. Both books were published by Routledge Press. He has also served as the general editor for the online journal Medica, and was one of the founding members and inaugural president of Medica: The Society for the Study of Health and Healing in the Middle Ages. He served as an expert for The Washington Post's article on the cultural interpretation of disease in relation to SARS and has published articles in Shakespeare Magazine, the Writing Lab Newsletter, the Modern Language Association's Teaching Medicine and Literature, the Connecticut Review, and Essays in Medieval Studies.

Grigsby received a B.A. from Moravian University, an M.A. from Wake Forest University, and a Ph.D. from Loyola University Chicago, specializing in medieval literature, early modern literature, and the history of medicine. In 2014, he completed Harvard University's New President's Program.