The Pivot in His Career Path

The college experience is all about self-discovery and finding your true passions. Sometimes this can lead to a surprising career path not even close to your original plan. Miles Molerio ’20 could certainly describe his entry to college in this way.

“When I first came to Moravian University I applied with the intention of becoming a veterinarian in the future. Because of the amazing learning opportunities I have had, I was able to pursue a passion I had yet to fully realize before college,” he says.

But the gender theory major shouldn’t be too surprised by the pivot in his career path. It was Moravian’s diverse student body and inclusive campus organizations Molerio observed during his initial visits that attracted him to the school in the first place. 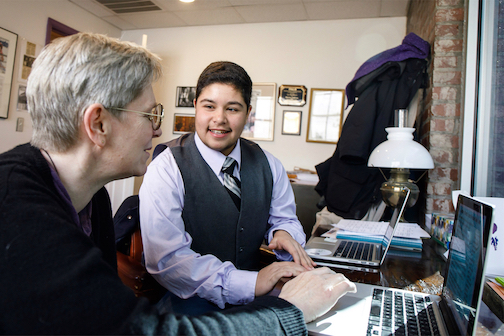 For Molerio, securing an internship to complement his major meant finding a place where he could support the local LGBTQ+ community. That’s why he set his sights on assisting the efforts of the Allentown non-profit Bradbury-Sullivan LGBT Community Center.

“I wanted to work there because my future long-term goals have always been to work for and dedicate my life to helping the LGBTQ+ community,” Molerio says.

As an intern for Bradbury’s Training Institute, Molerio assisted with all matters related to training, including research and preparation for trainings, bookings, and assistance during training sessions. “I learned the processes involved in educating non-profit, government, healthcare, and education professionals about working with the LGBTQ+ community,” he says.

Since much of Molerio’s coursework is LGBTQ+ focused, he says that he felt prepared to espouse the important issues facing this population of our community.

“I feel that I have grown better as a person, and my communication skills have developed more.” – Miles Molerio ’20

“My internship allowed me to learn how to educate others on the needs of the LGBTQ+ community, as well as conveying those conversations in various backgrounds,” he says.

Becoming an effective communicator was key, and Molerio says that developing skills such as this has increased his confidence in being an attractive job candidate after graduation. “I feel that I have grown better as a person, and my communication skills have developed more,” he says.

Molerio’s future goals include earning a master’s degree in psychology or counseling so he can become a therapist specializing in LGBTQ+ issues, or perhaps support student diversity through an administrative role on a college campus.

“I hope to not only continue down the path I’ve created for myself, but to solidify this [gender theory] program as something others with my same passion can also pursue,” Molerio says.