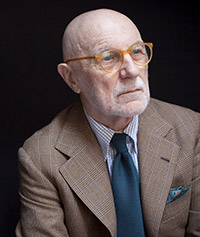 The year was 1973. Town & Country magazine had never before carried an article on men’s fashion. Then the editor received a piece by G. Bruce Boyer, setting the record straight on the much-covered style and dress of the Duke of Windsor, who had recently died. The publication of Bruce’s feature article marked the beginning of an 18-year reign as the menswear editor of Town & Country, where he not only wrote stories but was the stylist on photo shoots.

What caught that magazine editor’s eye was Bruce’s writing style, which he called “authoritatively sophisticated.” Bruce brought his literary background—quotes from the likes of Shakespeare and Chaucer—to his work. It was a background shaped at Moravian College through his study of English literature and deepened by his master’s work at Lehigh.

Since his beginnings at Town & Country, Bruce has enjoyed an illustrious career, rising to the pinnacle of expertise in men’s style and clothing. Hugo Jacomet in Parisian Gentleman calls him “one of the greatest men’s style authorities alive.” Men’s Top Tens has this to say: “Though few are privy to the provenance of that enigmatic first initial, many in the menswear world hazard a guess that the G stands for God. That’s how respected—nay, revered—G. Bruce Boyer is within sartorial circles.”

Evidence of the truth of those words lies in Bruce’s achievement. In addition to Town & Country, his feature articles have appeared in Esquire, Harper’s Bazaar, Forbes, The New York Times, The New Yorker, Departures, Plaza Uomo, and The Rake. He was the first American fashion journalist to write for the noted Italian fashion magazine L’Uomo Vogue.

He is the author of three books on the history of men’s fashion: Elegance: A Guide to Quality in Menswear; Eminently Suitable; and his most recent, True Style: The History and Principles of Classic Menswear. He has also written two books on the history of fashion in the cinema: Rebel Style: Cinematic Heroes of the Fifties and Fred Astaire Style. Boyer coauthored Gary Cooper: Enduring Style with Cooper’s daughter Maria Cooper Janis, and he was a contributor and consultant to The Encyclopedia of Clothing and Fashion.

Bruce has appeared on national TV and National Public Radio, and as a consultant and commentator on the TV documentary series The Hollywood Fashion Machine.

His deep knowledge and expertise recommended him to the Museum at the Fashion Institute of Technology, where he contributed to several exhibitions, including in 2014 co-curating “Elegance in an Age of Crisis: Fashions of the 1930s,” for which he coauthored the accompanying book.

Within the fashion industry, Bruce has worked as coordinator of public relations and media for the Custom Tailors & Designers Association of America and is editorial consultant on men’s clothing, fashion, and grooming. His extensive knowledge of the clothing industry and custom trades has also led him to private and corporate image consulting, as well as writing and consulting for clothing manufacturers, designers, and retailers including Paul Stuart, Ralph Lauren, Bergdorf Goodman, and Drake’s of London, among others.

Most recently, Bruce collaborated with the Italian master shirt maker Marol on a collection of high-end men’s shirts available at Marol retail shops around the world.

Bruce not only does fashion well; he wears it well. In 2017, Permanent Style—the UK authority on classic and luxury menswear and one of the best men’s sites in the world according to GQ, Esquire, The New York Times, and others—named him among the five best-dressed men of the year.