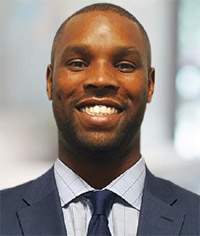 When it comes to understanding the dynamics of human interaction, Hakim Myers has an undeniable gift to connect people and build networks. Since graduating from Moravian College in 2009 with a BA in sociology, he has used his positivity and innate ability to connect with people to build an impressive career in talent acquisition. From health tech to architecture, companies from all over the New York metropolitan area have sought his guidance and expertise.

Myers learned about the importance of hard work and creating valuable relationships while he was growing up, through the example set by his mother. A single parent and the youngest of five, she often had minimal resources but always found a way to provide for him and his sister, Kianah. Myers is very grateful for his mother’s many acts of selflessness, such as moving to Princeton to make sure her kids were getting the best education. He will never forget when his mother could no longer afford the tuition during his junior year of college and the support he received from friends, family, and the college that made graduation a reality. Looking back, Myers believes this is what put him in the position to take on experiences that have made him the man he is today.

Besides having a transformative educational experience at Moravian College, Myers also established valuable relationships that will last a lifetime. The connections he made have served as mentors and advisors, but more importantly he believes they have become part of his family. He occasionally remembers the first time he heard President Grigsby describe how alma mater means “soul mother.” That couldn’t be more true when describing what Moravian means to Myers.

Shortly after graduating, Myers partnered with the college’s Center for Career and Civic Engagement to attend events where he could share his professional knowledge with students, host students for externships, and serve as a mentor and role model to many. He consistently prioritizes giving back to his alma mater and the next generation of graduates as they embark on their professional-career journeys. He also enthusiastically offers his time and talent to the college by participating in programs such as Backpacks to Briefcases. Since 2013, he has further served as a member of the Moravian College Alumni Leadership Council, counseling the Board of Trustees and college president on areas of sustainability, growth, and development.

Myers currently works as a senior sales recruiter at JW Player in New York City, and consults with different start-ups to jump-start their PeopleOps initiatives.