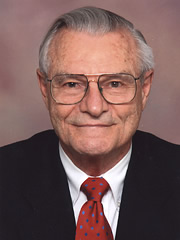 Joseph L. Powlette received his B.S. in physics, graduating with honors from Moravian College in 1960. He went on to receive his M.S. from Cornell University in 1963. Joseph is currently the Louise E. Juley Professor of Science and a professor of physics at Moravian.

Joseph was an adjunct professor for eight years at Temple University in the graduate program in general education (GPGE) and served as chair of the three-person science team for four years.

Above all, Joseph is a teacher. He is the advisor for the cooperative engineering programs and has directed student research projects on various aspects of the Mossbauer effect, the Compton effect, digital electronics, and on specialized topics in the interfacing of microprocessors to lab instruments. He has also established an electronics laboratory station for the blind and has taught two blind students in linear and digital electronics.

Professor Powlette has received many awards, including the Lindback Award for Outstanding Teaching (in 1965), and has been inducted into numerous societies such as the Sigma Pi Sigma Physics Honor Society, the American Association of Physics Teachers (AAPT) and the Central Pennsylvania Section of AAPT, which he served as president. Joseph also served as chair of the physics department for more than a decade.

Professor Powlette is known by his fellow teachers and students as a tireless, dedicated person who today loves his job as much as, or more than, he did 48 years ago, when he began imparting his knowledge to students.