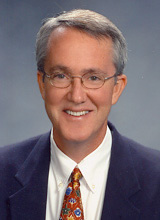 The Moravian College Alumni Association is honored to present its 2002 Haupert Humanitarian Award to Frederick P. Rooney '75 in recognition of his dedication to issues of justice. His innovative work has significantly contributed towards providing access to justice for the impoverished and minorities on the local, national, and international level.

After graduating from Moravian College with a B. A. in Latin American Studies in 1975, Fred earned an M.A. in Bicultural/Bilingual Studies from Marywood College in 1983. He then earned his J.D. from the City University of New York's School of Law in 1986 and established a private, community based, bilingual law firm in Bethlehem. In 1994, the Pennsylvania Bar Association recognized Fred's firm for its pro bono work. In 1998 Fred returned to CUNY to direct its newly established Community Legal Resource Network (CLRN). Part of a consortium of law schools, its mission is to develop programs that support solo and small-firm lawyers in order to make legal services more widely available to low and moderate income individuals and communities. Numerous publications, including the American Bar Association Journal, have highlighted Fred's successful CUNY program, and law schools throughout the U.S. are using it as the primary model for establishing their own legal networks of support. Fred has been called upon to offer legal analysis on a number of talk shows, including the Phil Donahue Show, and on NBC, Telemundo, Univision, and Oprah Winfrey's Oxygen Network. His widespread pro bono efforts have encompassed working with both domestic and international child abductions and resourcing medical care for Latin American children with life threatening medical conditions. Fred's extensive travels have included participating in a peace delegation to Chiapa, Mexico. Whether he is addressing national issues, speaking to our local students, or personally helping a child in need, Fred Rooney continues to provide a living example of what it means to work towards "providing liberty and justice for all" in the Americas.