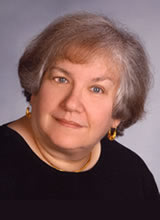 The Comenius award is given in recognition of outstanding achievement in an alumna's or alumnus' field of work. The Alumni Association is proud to present Judith Share Yaphe ’66 with the 2003Comenius Award in recognition of her distinguished career as a specialist in Middle Eastern political analysis.

A Distinguished Research Professor at the Institute for National Strategic Studies, the National Defense University, Washington D.C., Judith is a specialist in Middle Eastern political analysis, with a focus on Iraq, Persian Gulf, Arab, Islamic and regional issues. Prior to joining the INSS in 1995, Dr. Yaphe served with the Directorate of Intelligence, Office of Near Eastern and South Asian Analysis at the Central Intelligence Agency. Considered to be one of the most respected authorities on Iraq in the U.S., Judith received the Intelligence Medal of Commendation for her work on the 1990-1991 Iraq/Persian Gulf war. Professor Yaphe co-authored the book Strategic Implications of a Nuclear-Armed Iran and wrote and edited The Middle East in 2015: the Impact of Regional Trends in U.S. Security Planning. She has also published articles in professional journals on Iraq, Iran, human rights, and U.S. interests in the Persian Gulf. Dr. Yaphe has presented numerous papers and has been a regular guest on NPR's All Things Considered and television news programs such as PBS’ The News Hour with Jim Lehrer, Nightline, and CNN. Following the advice of her senior honors adviser, Dr. Daniel Gilbert, Judith pursued her Ph.D. in Middle East history with a concentration on Iraq at the University of Illinois. After receiving her Ph.D. in 1972, Judith joined the CIA as a Middle East specialist where her background proved to be invaluable. In addition to her other responsibilities, she is currently an Adjunct Professor in the Eliot School of International Affairs at the George Washington University, where she teaches a course that must be dear to Doc Gilbert’s heart—U.S. Foreign Policy Toward the Middle East. Dr. Yaphe, who worked for Dr. Rokke at the National Defense University, has two grown sons and resides in Vienna, Virginia, with her spouse, Michael.