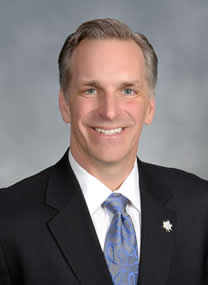 Bryon Grigsby, Ph.D. Class of 1990, is President of Moravian College and Moravian Theological Seminary. He was inaugurated President July, 2013, and reports directly to the Board of Trustees. Among the important projects he has initiated as President are developing the academic programs of the college, upgrading facilities, enhancing the technological structure of the campus, and creating a new strategic plan for the college. One of President Grigsby’s first initiatives was to issue Mac laptops and iPads to incoming students. Faculty were also issued Mac computers and iPads. The purpose of these initiatives was to advance the qualities of learning and community on campus. These and other initiatives have aided in the transformation of the college.

After graduating from Moravian College, President Grigsby completed a Ph.D. at Loyola University in Chicago and taught English at Centenary College. He eventually transferred to college administration, and before returning to Moravian College as President served as senior vice president and vice president for academic affairs at Shenandoah University in Winchester, Virginia. Of his experience as an English major, President Grigsby has written: “Moravian College’s English Department provided me with both a focus and a career. Without the faculty I would not have been able to achieve my current position. I am forever indebted to Moravian College and the English Department.” He added that “English and writing are the most flexible career paths. Most people think you have to be a teacher if you major in English and writing. This is simply not true. The ability to communicate and think deeply are two of the most valuable skills you can get. The English Department always delivers on these two outcomes, and with those skills you can do anything.”