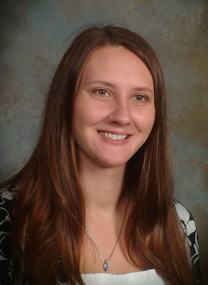 Courtney Wright-Werner graduated in 2006 with a BA in English and a double major in Religion and a minor in Women's Studies. Courtney worked in the Writing Center, wrote and edited for the Comenian, organized vegan Thanksgivings and lobbied for better on-campus recycling with the Environmental Coalition, organized all kinds of community-based projects with C3, and attended Poe Evermore trips with the English Department and Sigma Tau Delta.

After graduating, Courtney moved to Texas, where she earned an MA in Rhetoric and Composition at Texas State University. Upon graduating, she moved to Ohio and earned a PhD in Rhetoric, Literacy, and Social Practice from Kent State University. At Texas State and Kent State, Courtney spent her time teaching first-year composition and researching writing centers and digital composition. She took her first post-graduate position at Hope College in Holland, MI, where she developed a Writing in the Disciplines program.

Currently, she works at Monmouth University in West Long Branch, NJ as an Assistant Professor of English and faculty advisor for MU's chapter of Sigma Tau Delta. She is currently researching writing center professional development at small liberal arts colleges as well as how first-year writing programs across the country tackle the question of how and why to include digital composition in their courses.