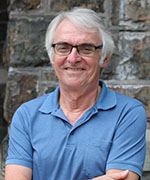 Dr. Lalande is Professor of French, Associate Member of the Department of Political Science, and Advisor for the International Studies program.  Born and raised in France, he received his Baccalauréat from the Lycée Gay-Lussac in Limoges, and his Licence ès Lettres from the Faculté des Lettres et Sciences Humaines of the University of Poitiers. After graduation, he attended the University of Iowa where he received his M.A. and  Ph.D.

At Moravian University, Dr. Lalande has taught all levels of French courses, more particularly French Grammar and Composition, 20th century French Novels, 20th Century French Theatre, and French Contemporary Culture.  Recently, he has offered a new course at the advanced level entitled Art, Culture and History in Paris.  Dr. Lalande is also teaching, on a regular basis, a course on Contemporary European Politics for the Political Science Department, and a new course on Urban Modernization in the Global Age for the Learning in Common program.  His recent research has focused on the politics of the European Union and on the history and politics of Paris. Dr. Lalande regularly attends conferences and has lectured on a variety of topics relating to French and European politics. He travels to Europe frequently and has taught more than twenty special topic courses involving trips abroad with students. In the last few years he has also traveled on several occasions to Japan, China and Thailand where he did research for his most recent course on urban modernization.