As a Modern Languages and Literatures major, you'll be challenged work toward mastery of a second language and to extend your studies as far as possible in history, economics, management, literature, linguistics, philosophy, art, religion, social work, and music.

For all language majors, extended time in an organized program of study abroad is highly desirable, and you'll be expected to take advantage of extracurricular opportunities for contact with languages and cultures—such as language clubs, foreign films, and other cultural events.

In addition to the French, German, and Spanish majors and minors, the Moravian University Modern Languages and Literatures department offers select courses in Arabic, Italian, and Latin.

Want to Add a Foreign Language as a Second Major?

Set I of an interdepartmental major in French, German, or Spanish consists of six course units above Modern Language 105. Courses in Sets I and II are selected by the student with the approval of the advisor. It is possible to combine language study with area studies. 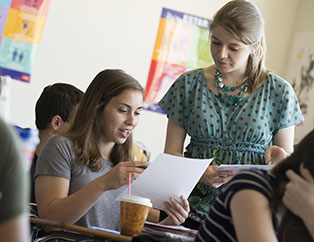 The mission of the world language education program is to prepare professionals who understand that pedagogical choices grow from a deep understanding of the study of world languages and cultures. We'll prepare you to understand the unique needs of all learners, honoring the diverse students in our classrooms and the larger community being served.
Learn More about the program