The main goal of this study was to conduct an inventory of the arachnid species at the Lehigh Gap Nature Center using an empirical approach. A secondary goal was to use standardized active sampling techniques to quantify the abundance and diversity of arachnids. This compares the abundance and taxonomic diversity of arachnids between habitats that were heavily affected by pollution (on the eastern part of the property) and those that were less affected (on the western part of the property). We hypothesized that habitats with contaminated heavy metals will have lower abundance and lower taxonomic diversity than the habitats that were not contaminated.

I think this was an idea that both Dr. Proud and I came up with after discussing multiple potential projects, but this was the one that we decided on since this would set the foundation for future studies on arachnids out in Palmerton and potentially other areas.

What was the best part about working with your faculty mentor? What valuable insights did he bring to your project?

I was honored to work with Dr. Proud and I am so happy that I was able to learn so much from him about arachnids. It turned my fear of them into a passion. There are too many insights that he brought to the project than I could count. 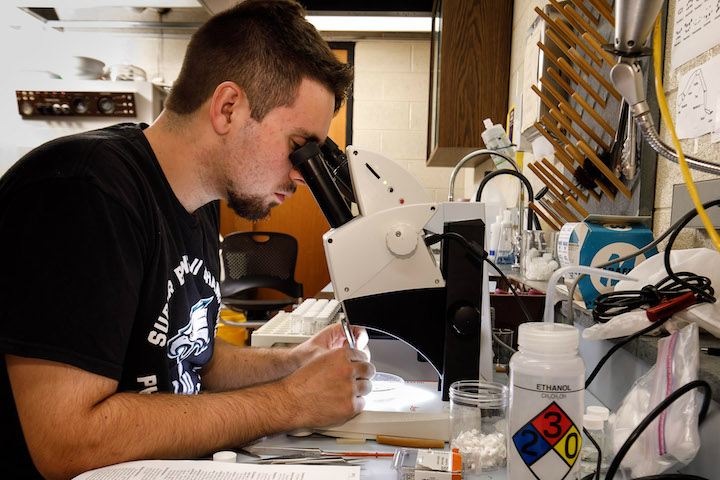 What was your biggest obstacle?

I think the biggest one was being able to boil down arachnids to species level and identify all of them. There are over 47,000 species and it would take more time to identify everything.

The biggest takeaway from this project was learning how to do field work on my own and handling sampling in a harsh environment. Furthermore, I was able gain a large knowledge on arachnids and I feel like I could do more research on this.

Overall, we captured 127 species of spiders representing 23 families and seven species of harvestmen representing two families. There were over 350 different samples accumulated in the lab right now, not even counting other insects. Using pitfall traps, the most abundant spider family captured was Lycosidae (47 individuals) and the most abundant harvestmen family captured was Sclerosomatidae, specifically Hadrobunus maculosus (44 individuals). Using sweeping and beating techniques, we most commonly captured spiders of the family Araneidae (23 individuals), while litter sifting captured the most Lycosidae, Amaurobiidae, Linyphiidae, and Thomisidae (5 individuals each).

Even though a collection of arachnids was generated it was impossible to determine the true overall diversity of the LGNC based on figures in our report to the LGNC. More time for collection will be necessary to gather more arachnids in a future project. We hypothesized that habitats with contaminated heavy metals will have lower abundance and lower taxonomic diversity than the habitats that were not contaminated. We were unable to reject or not reject this hypothesis due to the design of our sampling and the fragmentation of habitats across the LGNC. Furthermore, future studies at different sites will need to be conducted in order to compare the diversity from the LGNC to another site with similar features.

Overall, how do you feel about being awarded this opportunity?

I was shocked when I received the email to do SOAR and was overjoyed to be accepted in the program. It was something I’ve always wanted to do since I came here to Moravian. I knew I would gain experience with these types of research projects and improve my resume for graduate school.

Any plans to present this research outside the SOAR presentations?

I will be presenting at the Lehigh Valley Ecology and Evolution Symposium in 2019.