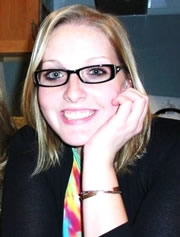 Project details: My SOAR project began with my interest in the activities of the well-known (and widely disliked) Westboro Baptist Church. I spent a good deal of time investigating First Amendment jurisprudence and studying law journals. I also created archives of key words along with public testimony (from newspapers, blogs, etc.) to try to decipher the role that freedom of speech plays in their day-to-day activities. Dr. Jasper worked on a case which originated in India that also dealt with the issue of free speech.

Why I wanted to participate in SOAR: The expectations of graduate schools and of the professional world motivated me to conduct undergraduate research. An acceptance letter I recently received from a respected law school commended me on my time spent as a research assistant in Moravian’s SOAR program, along with a strong academic record in sociology.

Results: My paper was accepted for a “Religion, Politics, and the State” roundtable discussion at the Eastern Sociological Society 2012 annual meeting in February. I will be presenting my research in New York City among other undergraduates and professionals who study and work in the field of sociology.

Future plans: I hope that I will have the opportunity to someday do further research on the Westboro Baptist Church and especially on how free speech plays a role in its activities. This topic is something I initially became interested in during the sociology of religion class I had with Dr. Jasper.