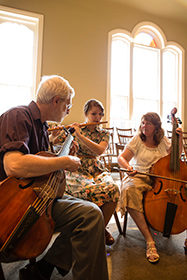 Project: Cantigas and Cancioneros: Preparing a Performer's Guide to the Music of Medieval and Renaissance Spain

Project details: I prepared a performer's guide to the music of Medieval and Renaissance Spain for the Early Music concert at Moravian College and a future project for the National Endowment of the Humanities. The performer’s guide includes modern day transcriptions of the original notation, the original text and translations of the original text, along with historical and biographical information about the pieces and composers.

Why I wanted to participate in SOAR: First and foremost, I love research and the world of academia. I am starting an Honors project in Fall 2012 and I thought that this would be the best possible segue, as my Honors project is on a similar (yet more specific) topic. The experience I gained in the SOAR program will be beneficial to both my Honors project and my goal of obtaining a Musicology degree after graduation.

Results: The performer's guide was fun to make and I learned a lot in the process. I learned how to understand and translate Renaissance Spanish as well as Galician, a specific dialect of Spanish used poetically throughout the Renaissance. I also became familiarized with old musical texts, such as the Cantigas de Santa María and the Cancionero Musical de Palacio and learned how to interpret them musically. Dr. Lipkis used the performer’s guide this summer in a music camp for its examples of Renaissance Spanish music.

Future plans: I am doing an Honors project for my senior year on interpreting the attitudes of Moors in Renaissance Spanish music. With this experience, I hope to be able to attend graduate school for Musicology after graduating in May 2013.