“Effects of Ocean Acidification on Growth of Callinectus sapidus”

Dr. Lord came to me with the idea for this project, and while his initial idea was on the growth effects of mussels I chose to use the same experimental design, but for a species of which I had more interest. I have grown up with blue crabs my whole life since I live on the Chesapeake Bay, so I had concern as to whether or not they would be harmed by the ever-changing chemistry of the ocean.

What’s the best part about working with your faculty mentor? What valuable insights has he brought to your project?

The best part about working with Dr. Lord is that he is open to all ideas while at the same time being realistic about what would work and what would not work. He was already well versed in how the experiment could be set up from previous research and he taught me that creativity is important in this field. For instance, all of my crabs had to be isolated from one another so we put them in plastic spheres with holes that allowed water flow. These spheres are not made for organisms at all, but are actually meant to be used for water infusers. I still wonder what the company must think when we order them by the dozens! 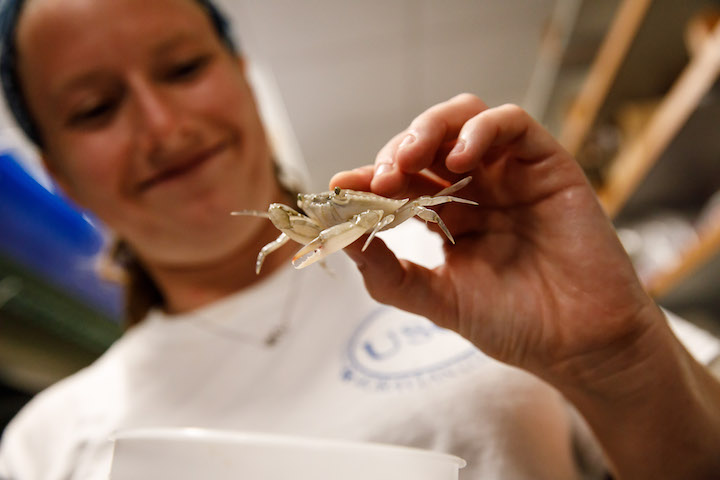 What has been your biggest obstacle so far?

My biggest obstacle thus far has been the regulation of carbon dioxide being pumped into our tanks. We used pH sensors to monitor the amount going in, but due to the organisms in the tanks it tended to throw off the correct pH amount. We decided to constantly calibrate the sensors, as well as do frequent water changes, to help with this obstacle in order to obtain an accurate reading.

That would be experimental design and efficiency. I learned how to set up a successful operating experiment that seemed impossible at the beginning. Also, I learned that taking care of live organisms while having the intent to measure their growth involves daily feeding, weekly water changes, and pictures/weights after each growth period. This is very timely so it is prudent to learn how to be as efficient as possible.

The result of my project was not what I was hoping for. While I love blue crabs I was hoping that their growth would be negatively impacted as a result of ocean acidification, however it was not. I was hoping for the opposite because as an environmental science major you find issues in our environment and seek policy changes to stop them. While callinectus sapidus is not affected by ocean acidification other calcifying organisms are such as: clams, mussels, oysters, and urchins.

Overall, how do you feel about being awarded this opportunity? Why should other students take advantage of the SOAR program at Moravian College?

I feel extremely grateful for being awarded this opportunity. It gave me a true insight as to what the real world is like for someone in my field. In classes it is difficult to bring everything you learn outside of college, but with SOAR I am confident in saying I will use everything I learned outside of college.

Do you plan to expand upon your research?

I will be working on an honors project for my final year. I am still super interested in blue crabs so I will be using them for my experimental study. While ocean acidification did not affect their growth, I am going to see if it affects the strength of their shells. Also, I am going to be studying their camouflage abilities.