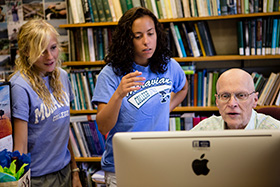 Project: Anti-herbivore Defense in Two Non-Myrmecophytic Species of Cecropia in the Tropical Forests of Ecuador

Project details: My project entails a study of anti-herbivore defenses in the tropical tree Cecropia sciadophylla. In the tropical forests of South America, leaf-cutter ants are important herbivores. These ants not only harvest pieces of leaves from tropical trees in the canopies, but also transport them along foraging trails to their underground nests. In their underground nests, the leaf-cutter ants use these leaves to grow a fungus. The ants use this fungus as a source of food. Throughout my project I will study potential defenses against these ants in the tree Cecropia sciadophylla using a pick-up assay.

Throughout my project I will be harvesting leaves of different ages from the tree and presenting them to the ants along the foraging trails to see if they are acceptable. The rate at which the leaf pieces are picked up and carried away by the ants in my pick-up assay will be my indicator of acceptability. I want to compare leaf pieces from young, immature leaves, with mature leaves of C. sciadophylla. Very young leaves of tropical forests are generally more vulnerable to herbivore attack than older mature ones. Because of this, they have higher levels of chemical defenses. If C. sciadophylla can defend itself chemically against leaf-cutters, I predict that leaf fragments from young leaves will be less acceptable to the leaf-cutter than older more mature leaves. Young leaves then should have higher pick-up rates than mature leaves.

Results: Possible reasons for the ants avoiding solvent control oat flakes are that the solvent did not completely evaporate before we used the disks. The HCl in the extraction solvent was included to maximize extraction of anthocyanin pigments (known to have anti-fungal properties), but it may also have deterred the ants from picking up the oat flakes. Tissue disks from leaves of the non-myrmecophyte Cecropia sciadophylla at each stage of leaf development as well as disks from the stipule tissue were rejected by leaf-cutter ants. From our data it is not possible to determine if this rejection is caused by chemical defense and/or physical properties of the leaves because the ants did not harvest solvent-treated oat fakes. We suspect that the compounds the leaf cutters reject may be anti-fungal compounds.

Future plans: I plan to graduate with a degree in General Science and Elementary Education. Upon graduating, I plan to pursue a career as an Elementary teacher. I also plan on attending graduate school and receiving my master’s degree in Special Education.