Today when you hear someone talk about the “Moravian Vespers,” those of us from the Lehigh Valley and surrounding areas, automatically think of “The Moravian University Christmas Vespers.” The Moravian Vespers, however, were originally referred to as “The Christmas Candle Service.” It was a one day event open only to students, faculty and staff, and it was held in the day time. It is not until 1910 that students at Moravian Seminary for Young Ladies began referring to this service as “The Vespers Service,” as seen here in a news report from The Mirror: The Student Newspaper of Moravian Seminary for Young Ladies:

“Sunday evening, December the Fourth, the Seniors had charge of the Vespers Service. The special service for Advent and Christmas was used. Dr. Schwarze, of the Moravian University and Theological Seminary, delivered a very interesting address. The special part of the program consisted of a vocal solo by Martha De Hart, and a violin solo by Clara Heinrich. The Vesper Choir, which has been recently organized, rendered a beautiful selection. This choir promises to be a very prominent feature in our vesper services.”

As you can see here, the Moravian University Christmas Vespers service is beginning to take its modern day shape with the introduction of a choir, musical instruments, and a soloist performance. Although it is not documented which song Martha De Hart sang, one could assume that it was likely "Morning Star, O Cheering Sight", a song that prominently features a child soloist who takes turns singing verses with the congregation, and which is now considered a staple of College Vesper services.

The word “Vesper” means evening prayer, or the last service of the day, typically held around 6:00 PM. In some instances, the bell which calls the congregation to worship is also known as “the vesper”. 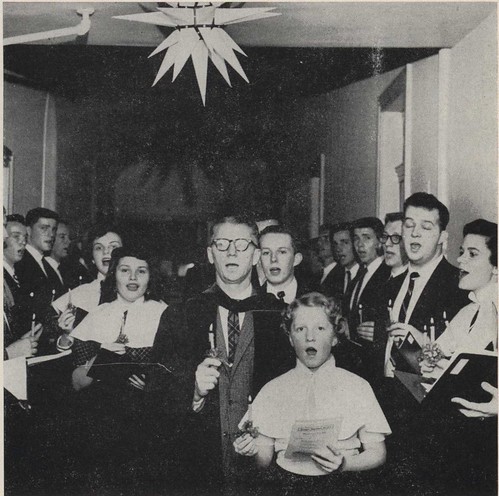