In addition to "Morning Star, O Cheering Sight," there are three hymns commonly included in the University Vesper services: "Jesus, Call Thou Me," "On This Day Earth Shall Ring," and "Angels From the Realms of Glory."

While not strictly a Moravian Christmas hymn, “Jesus, Call Thou Me” was the hymn sung by Count Nicolaus Ludwig von Zinzendorf on December 24, 1741, when he officially named the Moravian settlement in the Forks of the Delaware. Standing amid the livestock with the settlers, the second stanza brought the biblical Bethlehem to mind and the Count announced the decision to name the settlement Bethlehem. This decision had been made months before, but was a well-known Moravian "secret." [From Moravian Advent and Christmas Hymns, compiled by Albert H. Frank; © 2006 by the Moravian Music Foundation. Used with permission of the Moravian Music Foundation.]

The stirring medieval chorus “On This Day Earth Shall Ring” has been a staple of the University Vespers since the first combined service in 1957. The melody can be dated to the 14th century, and the popular Holst arrangement, sung every year, was written in 1916 specifically for use in procession. The original Latin text was written to honor Saint Nicholas – the patron saint of sailors and children – to whom he traditionally brings gifts on his feast day, December 6. The English translation is attributed to Jane M. Joseph, a pupil and associate of Holst.

For decades, the University Vespers have closed with the soaring strains of the beloved Christmas carol, “Angels From the Realms of Glory.” The tune was composed in 1867 by Henry Thomas Smart, an English organist. The text was written by premier English Moravian hymn writer, James Montgomery (1771-1854). Born in Scotland, Montgomery’s parents left him and two younger brothers in Moravian schools when they went to the West Indies to begin work in Tobago, where they later died. Montgomery pursued a literary career and was twice imprisoned for his liberal views. His poetic output includes some 400 hymns, many of which are beloved in many denominations. [From The Music of the Moravian Church in America, edited by Nola Reed Knouse; © 2008 University of Rochester Press. Used with permission.] 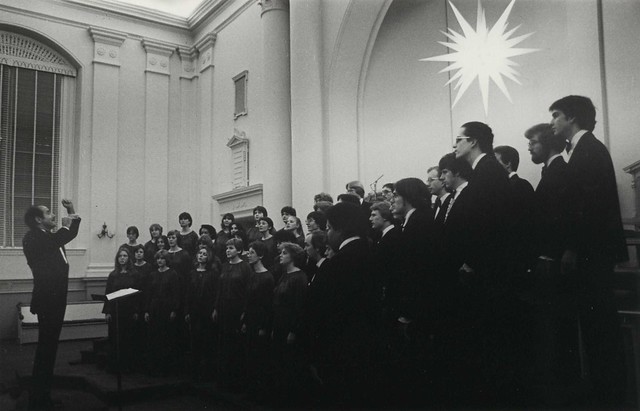